I have to pause between writing about ME to include some pictures of things I've been making in the kitchen lately...keep in mind that none of these things were served in the same meal...so, don't get worried :).

I've been enjoying my newly rediscovered hobby of cooking and baking, and luckily for the scales in the houses of my family and friends, I've moved more towards cooking than baking. So, more dinners than desserts, but still, there are some tasty treats coming out of the kitchen. 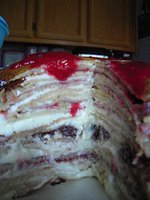 I made a Gâteau de Crêpes - a cake made of 20 layers of crêpes. The layers in between are raspberry sauce, pastry cream and a mix of chocolate chips & hazlenuts that tasted like Nutella, only not so sweet. I topped it off with powdered sugar and raspberry sauce. I called this "breakfast for dinner" so that I could get away with it not being dessert. I recommend starting a day early with some aspects of the recipe. 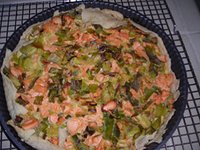 For my parents' anniversary dinner on Friday, I made a Salmon and Leek Quiche. I've never made a quiche that didn't have cheese in it, but this one didn't, and I liked how it turned out. I also have never made a quiche where the pie crust wasn't cooked before the "insides" of the quiche were put in, and, again, I was surprised by how well this worked.


And, finally, one last treat, fried okra. I can't share the recipe, because it's sort of a family tradition. Actually, it's sort of made up, but between my dad and me, we guessed at the appropriate spices for the okra, and it turned out quite well. I realized that trick is to use fresh okra, not the sticky frozen kind. 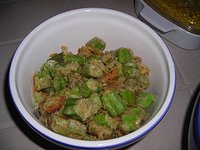 This side-dish (which went with a complete Southern-style meal on Sunday) reminds me of visiting my Great-Grandmother when I was younger. Other than her company and playing a game of marbles (during which she always cheated...), the best parts of the meal were fried okra and rice pudding. MMMMM. I guess I'll always be a Southern girl at heart.
Posted by Sarah at 8:23 AM

Sarah
A mother, wife, teacher, woman, photographer, writer, all of these things and more. I want to live life to the fullest and find my happy place.

Writing Out in the World

31 days to... 700 Square Feet awesome little dude baking because blogging's cool like that book reviews books bread breathe and be GOOD career changing the world one blog at a time clam the hell down clothes make the world go round communication crying with joy Daddy dating devouring books dinner eating green family friday song lyrics friends Genetically Programmed to Guilt Trip girl stuff growing up guy stuff hacking it in the corral hate politics or love 'em voting's still good for you I am a quirky artist I am SUCH a geek I live in a Wii-World I teach inspirational women Irene just being me library mom meals Mommy movies music my cat is oh so very loud and proud NaNoWriMo OMG we're getting married on feeling slightly old outings photography posse puppies real world wednesday Religion running like the wind salad Sanity seriously? stepping outside myself stuff Sushi teaching the meaning of love three beautiful things travel trust veggies waxing poetic about the past what feels natural when my face turns bright red why I hate politics why must everyone be from Oklahoma? Wine Guy wishing and hoping writing