For Such a Time 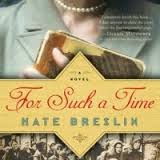 I get to choose the books I review for Bethany House, and this month I was hungry for fiction actually meant for adults. I read oodles and oodles of young adult fiction, but every so often, I need something with a protagonist older than fifteen.

Enter For Such a Time by Kate Breslin.  Stella Muller, or so her papers declare her name, wakes to find not the terrors of Dachau, but home of a resentful older woman. Soon after, a solidly built Nazi Kommandant arrives to take her with him to Theresienstadt.  According to her false papers, Stella was the secretary to the Kommandant's brother, and he believes that she was placed in Dachau by mistake. Stella lives in fear of the discovery of her true identity and also fears she will never reunite with her beloved Uncle Morty, the man who raised her after the death of her parents and who arranged for her false papers.  While Stella walks a fine line between safety and guilt, Kommandant Aric von Schimdt begins to realize that all he held true in his life as a German officer is not as he once believed and wonders if a life with Stella would bring him peace.

True history buffs will find many false facts, but Ms. Breslin owns up to those in an author's note at the end of the book.  The plot itself essentially sets the Book of Esther in the midst World War II.  Readers looking for a touch of history blended with a big helping of hope will enjoy For Such a Time.
Posted by Sarah at 2:22 PM

Sarah
A mother, wife, teacher, woman, photographer, writer, all of these things and more. I want to live life to the fullest and find my happy place.

Writing Out in the World

31 days to... 700 Square Feet awesome little dude baking because blogging's cool like that book reviews books bread breathe and be GOOD career changing the world one blog at a time clam the hell down clothes make the world go round communication crying with joy Daddy dating devouring books dinner eating green family friday song lyrics friends Genetically Programmed to Guilt Trip girl stuff growing up guy stuff hacking it in the corral hate politics or love 'em voting's still good for you I am a quirky artist I am SUCH a geek I live in a Wii-World I teach inspirational women Irene just being me library mom meals Mommy movies music my cat is oh so very loud and proud NaNoWriMo OMG we're getting married on feeling slightly old outings photography posse puppies real world wednesday Religion running like the wind salad Sanity seriously? stepping outside myself stuff Sushi teaching the meaning of love three beautiful things travel trust veggies waxing poetic about the past what feels natural when my face turns bright red why I hate politics why must everyone be from Oklahoma? Wine Guy wishing and hoping writing